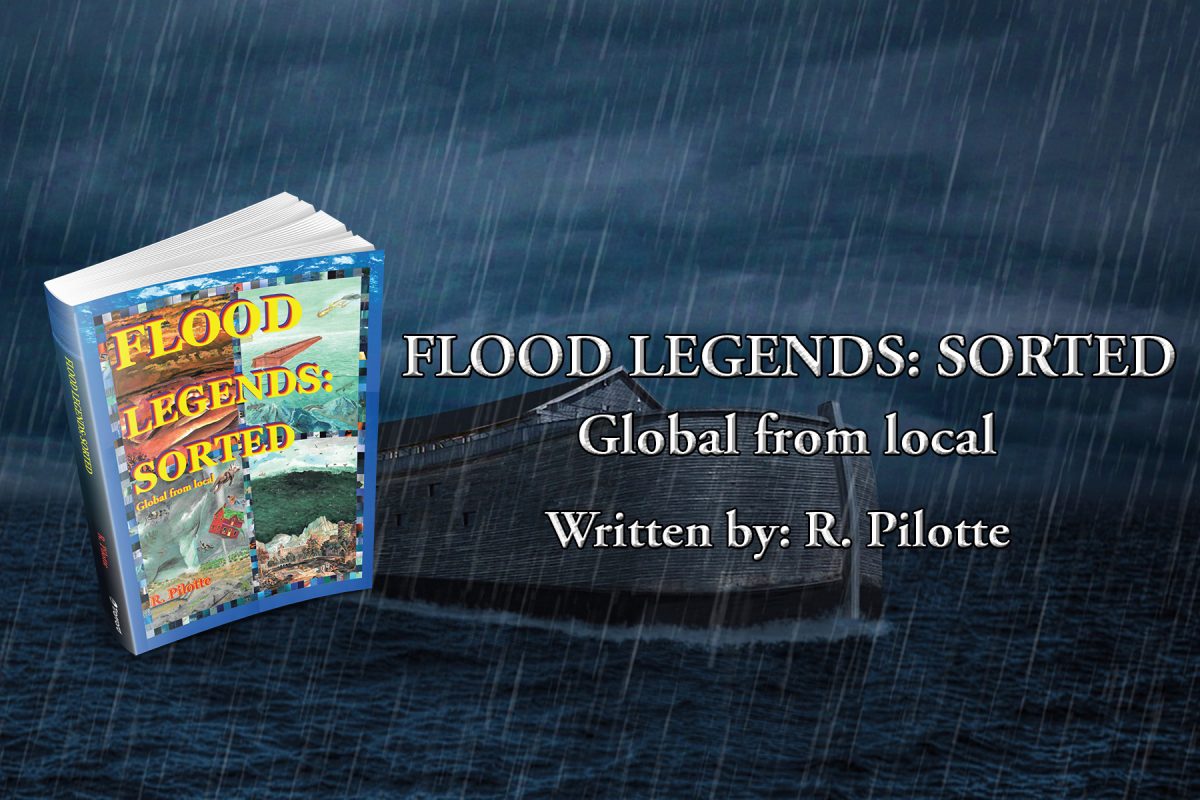 Global from Local and some evidence for each 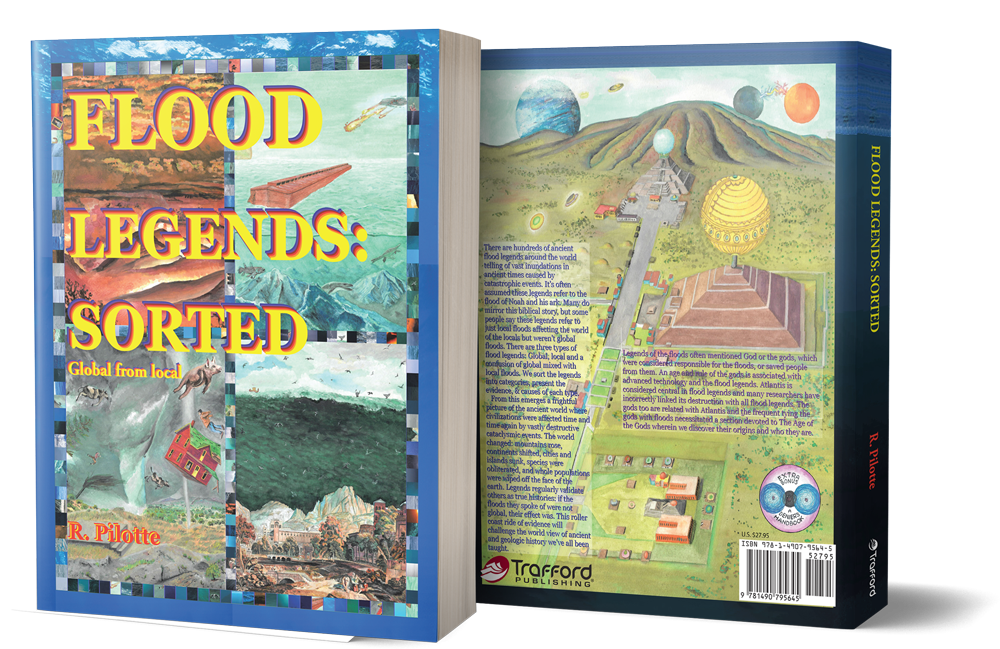 There are hundreds of ancient flood legends around the world that tells of vast inundations in ancient times caused by catastrophic events. It’s often assumed that these legends refer to the flood of Noah and his ark. Although many do mirror this biblical story, some people say these legends simply refer to local floods that only affected the world of the locals, not the whole globe. There are three types of flood legends: global, local, and a confusion of global mixed with local floods. We sorted these legends into categories, presented the evidences, and exhibited the causes of each type.

From this discussion emerges a frightful picture of the ancient world where civilizations were affected time and time again by vastly destructive cataclysmic events. The world changed—mountains rose, continents shifted, cities and islands sunk, species were obliterated, and whole populations were wiped off the face of the earth. Legends regularly validate others as true histories. If the floods they spoke of were not global, their effect was. This roller coaster ride of evidence will challenge the worldview of ancient and geologic history that have been taught to us.

Legends of the floods often mentioned God or the gods, which were considered to be either responsible for the floods or saved people from them. The age when the gods ruled is associated with advanced technology and flood legends. Atlantis is considered central in flood legends, and many researchers have incorrectly linked its destruction with all flood legends. The gods, too, are related to Atlantis and are frequently tied with floods, which necessitated a section devoted to the age of the gods wherein we discover their origins and who they are.

THE AUTHOR ORDER A COPY NOW

Text of an email written to a Bible study magazine to see if they would allow me to advertise my book in a their magazine.

To whoever is in charge of advertising

I’ve written two books. the first book’s research took a total of about 29 years to finish the more polished version.

But the research of that book clued me into something that, very very few people have ever realized: and no book I have been able to find or even see if it exists seems to investigate, explore or even hint at.

And that is that there are two types of flood legends…not one. Global, and “local”.

Thus I realized I had to write the book that everyone else missed.

We of the creationist persuasion assume that the myriad of flood legends simply refer to and thus proves by their very existence that the flood of Noah is therefore established simply by the existence of so many flood legends.

Writers of Christian material just assume by their very mass of numbers (200-600 legends of floods) that they all verify the flood legend of Noah..even though they conveniently gloss over some of the discrepancies in the versions they assume all speak of the global flood.

Indeed it is this mass of flood legends that has in fact been a boon to faith in many ways. Because of the existence of so many flood legends it is assumed help to validate the bible and the faith we place in it.

we have missed something very important by assuming all the flood legends speak of only the global flood.

The research I did for my first book showed me clearly that not only were there local flood legends not to be confused with the global flood legend and story in the scriptures, but I found that there was physical proof of the local flood legends. For example, the Hopi speak of being warned and then led underground to a safe place until the flood was over and then they were led back out. The location was generally known to be somewhere in the Grand Canyon, but around 1909 the place they came out from after the flood they speak of was actually discovered. It was a mile down underground and had storage rooms and the ability to house about 50,000 people!

The flood they spoke of was one that overran the North American continent when the continent shifted drastically westward forcing the pacific ocean over the continent.

With the discovery of this proof of a local flood (if you can call a continent being overran by a massive Tsunami “Local”) we can see that the bible indeed not only speaks of more than one flood (such as the flood that Abram came from across as spoken of by Joshua) but events recorded in the bible would and should lead us to conclude there were multiple flood events caused by events mentioned in the bible. For example when Joshua said ‘Sun and Moon stand still’, this meant the earth had to cease it’s diurnal motion in some capacity, in the region occupied by the Israelites, but must have causes massive devastation as the waters overushed the land in other places. Furthermore  legends of peoples  like The Aztecs and Mayans speak of a long night lasting an extra night. thus confirming the bible in a great way.

What I explore in my second book is how the legends of the ancient world and the flood legends in particular match up with the flood legends of others peoples, the bible and the catastrophes they relate to A: the global flood and the evidence that proves the first great flood. But I also then B: show the legends that speak of either both floods either by confusing the two types into one legend, or by actually describing the other floods and then the evidence for them. And I show how other legends around the world speak of extra catastrophes that either speak of floods, or can be assumed to line up with floods in other areas because of the size of the devastation they speak of in their locations.

What this means is a vast additional boon of proof to the Biblical science that has been missed for many years. For example we would be able to show what caused the fossils in a way that would force evolutionists society and old earth believers that it was these recent upheavals that buried so many civilizations, caused the ice ages and the mountains to rise so recently, indeed I call these people’s attention to the problems of dating methods and show the proof by a carefully linked series of legends and histories and scientific observations that forces the conclusion that the ice ages, the mountains and the buried civilizations and other details all occurred in recorded history, and not millions or billions of years ago. This I am confident is real Ammunition for the creationists once they get a hold of it. This is what we have been needing and without knowing it what we’ve been looking for, for 160 years since Origin of a species and even longer since Lyles principals of geology.

So what I was wondering, is if I could advertise my new book in your magazine, and or I was wondering if you would like to even read or review this book?

and if I can advertise in your magazine please send me a list of rates for various sizes.

thanks for your time. 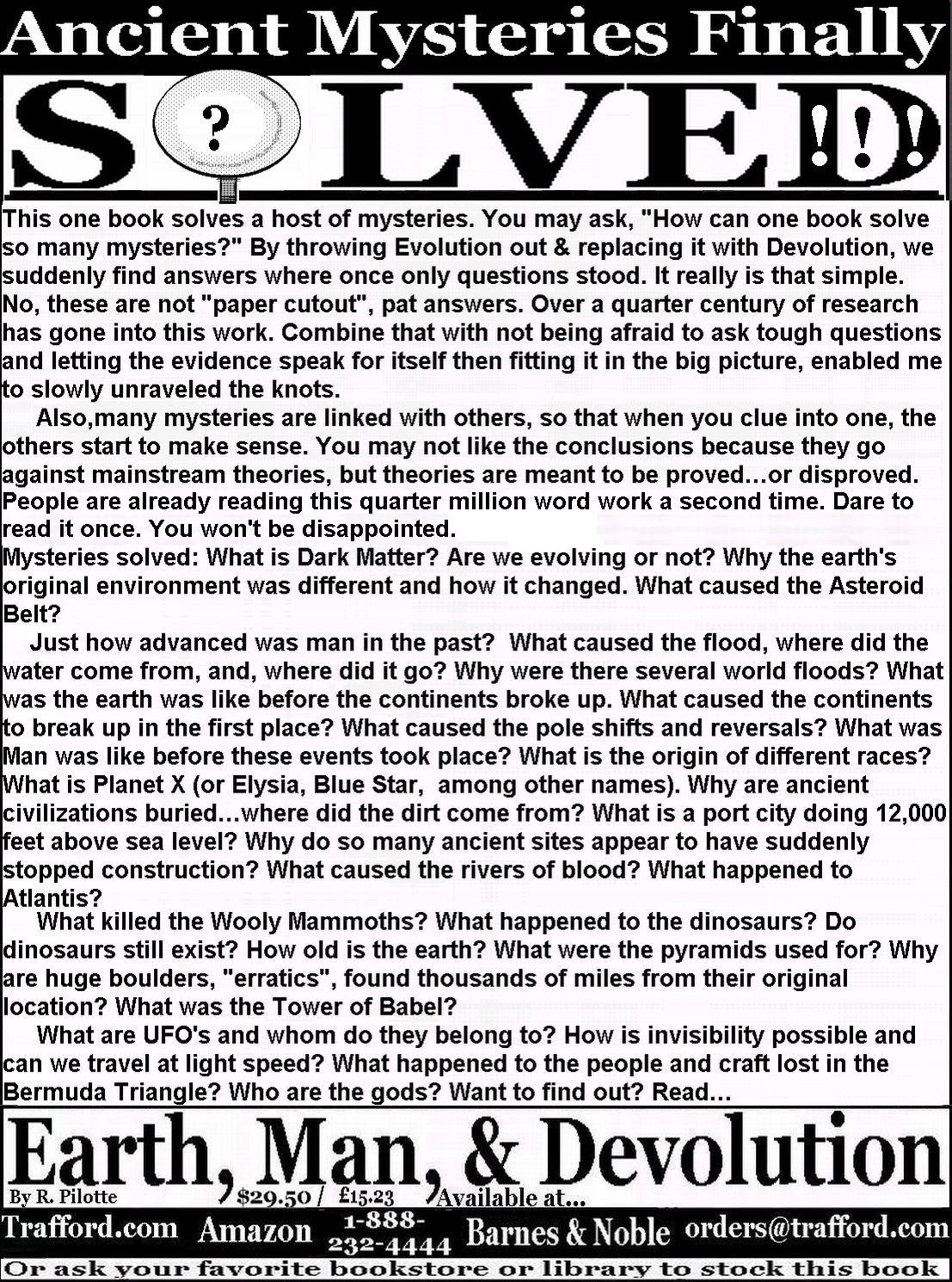 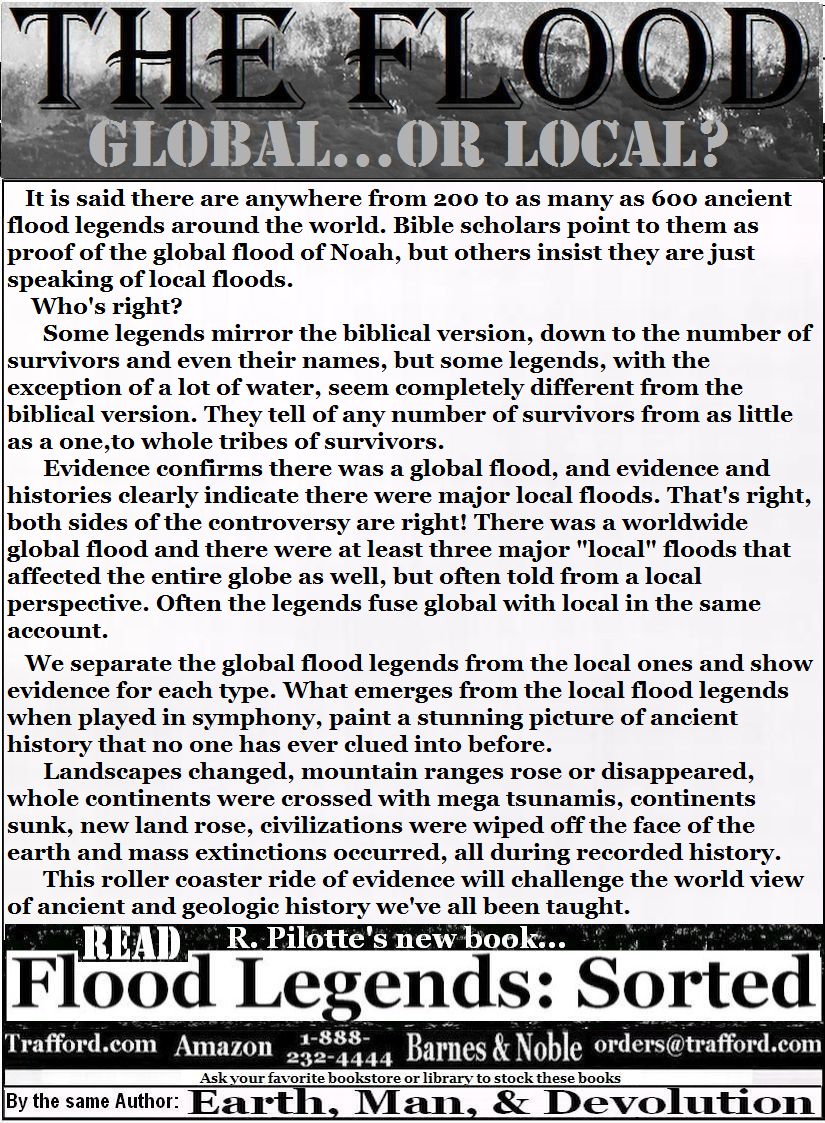 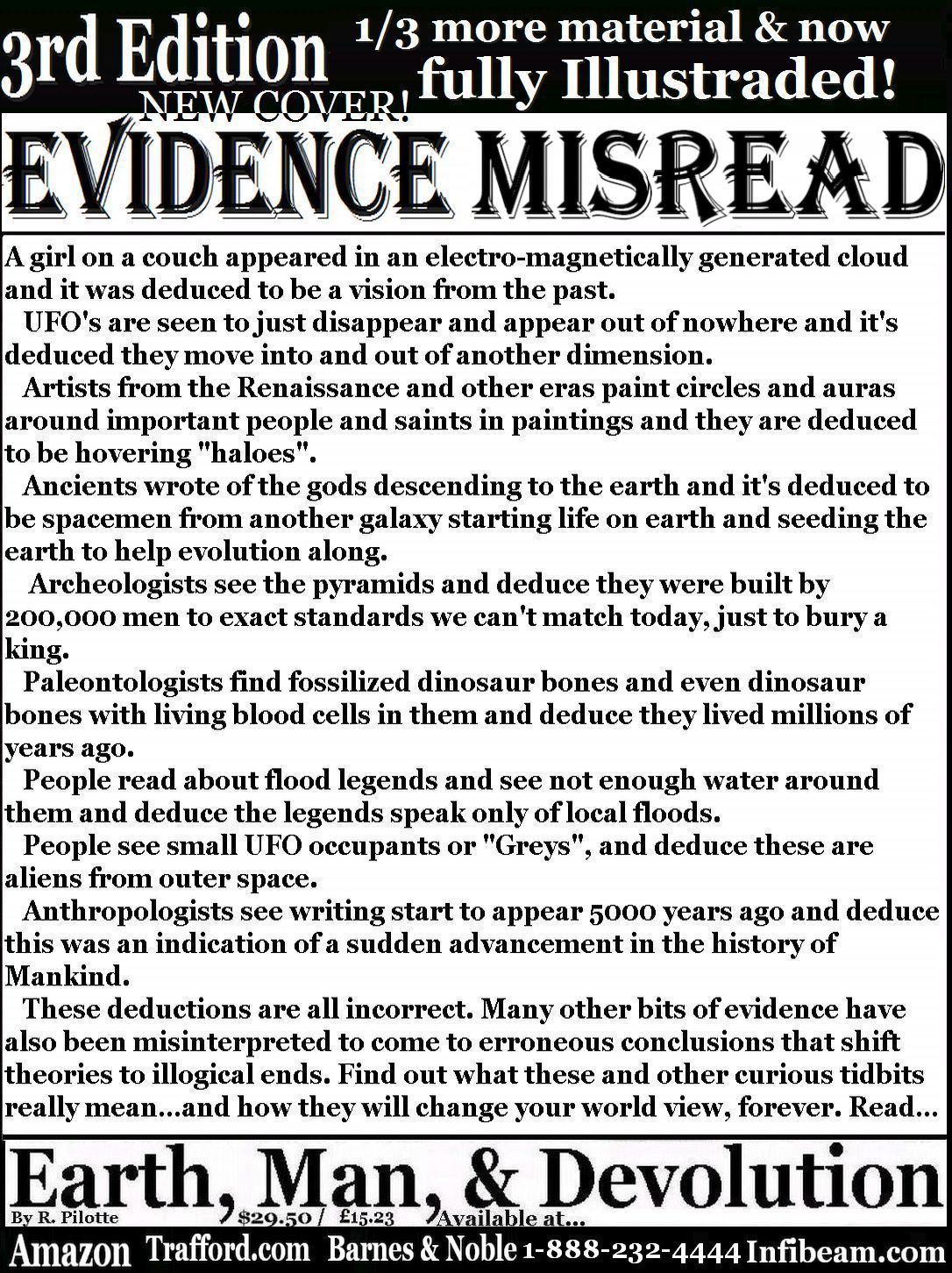 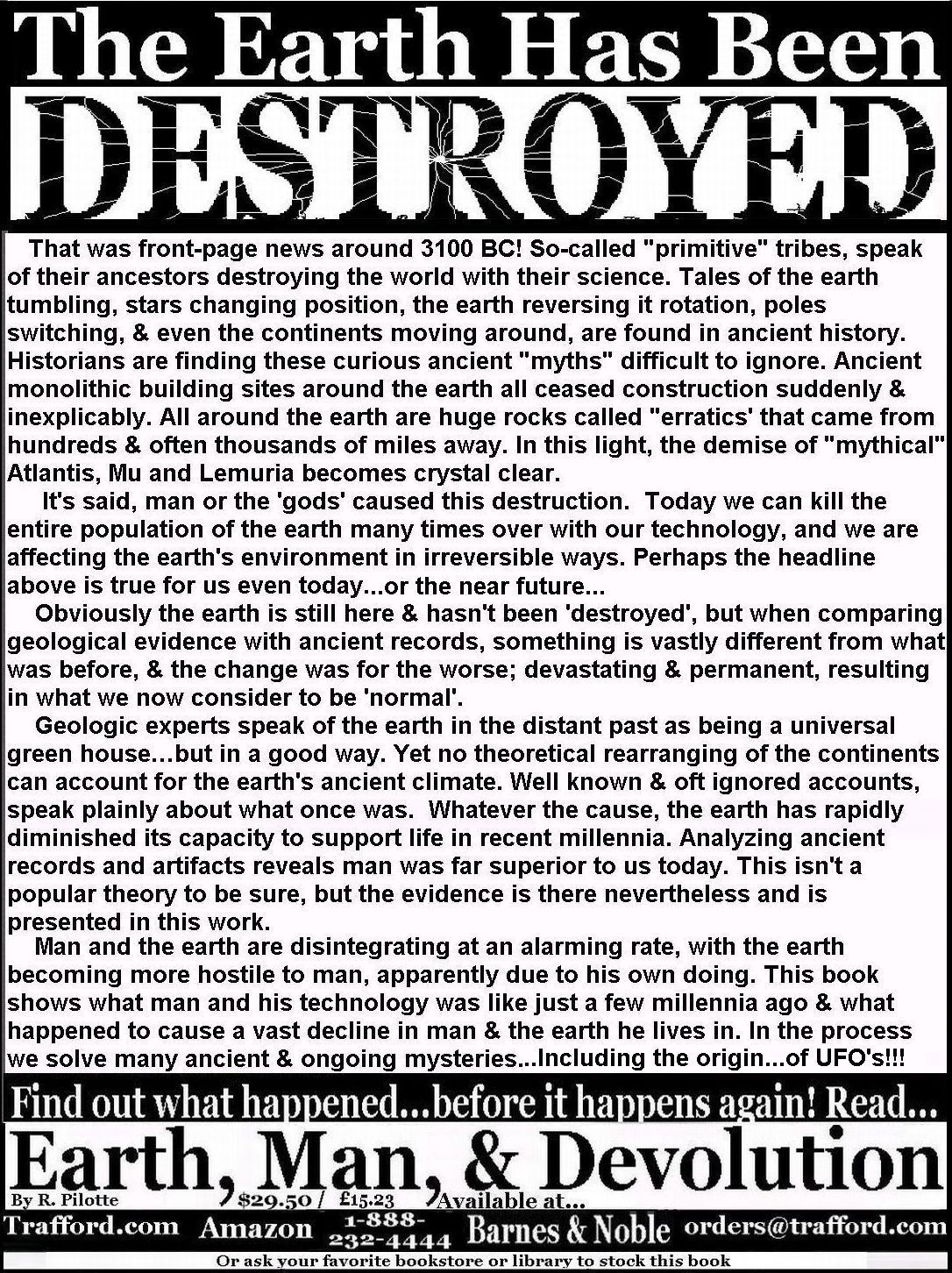